Home From Horta, Slowly But Surely (stress on the word slowly!)


We spent five days in the lovely town of Horta waiting for the winds to return, which they never did. Despite our anticipation as we were already more than three weeks behind schedule, we enjoyed our stay enormously! 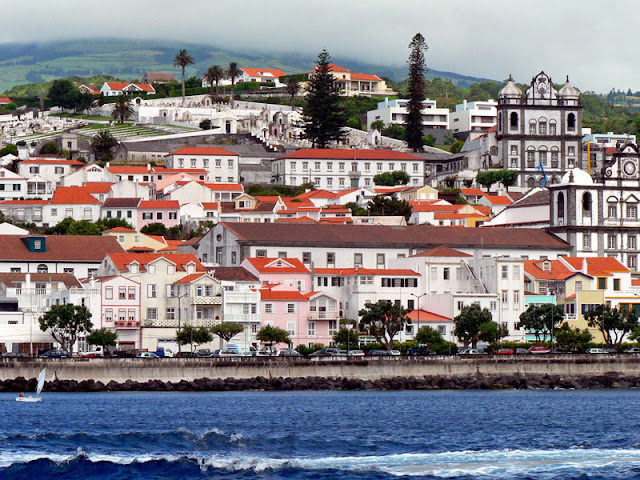 Although we had been to Faial before in 2003, we rented a car for a day and toured this beautiful island once again. It was as if we were driving along the paths of a lush garden as the roads were lined with luxuriant foliage, and the fields hedged with magnificent blue hydrangeas. The hydrangeas are perhaps the best known feature of the Azores, and have given Faial its nickname Ilha Azul i.e. Blue Island. The pant was originally introduced from China in the 18th century, and has since become naturalised. It is often thought that Horta was named after the plant's Latin name, hydrangea hortensia, although Horta actually owes its name to one of its early settlers, Joste van Huerter. 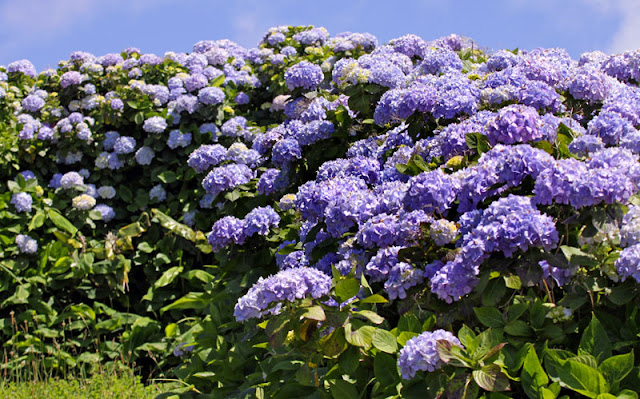 During our stay, we dined, wined and socialized at the legendary Peter Café Sport, elected the world's best bar for sailors in 2009. Ever since it was founded in 1918, Peter Café Sport has been a safe haven for sailors crossing the Atlantic. It's a bar, a restaurant, an information office, a weather forecaster, and sometimes even a charity organization, and therefore it has become a symbol of friendship for sailors from around the world. Besides, it has perhaps the cheapest G&T's of the whole Atlantic! 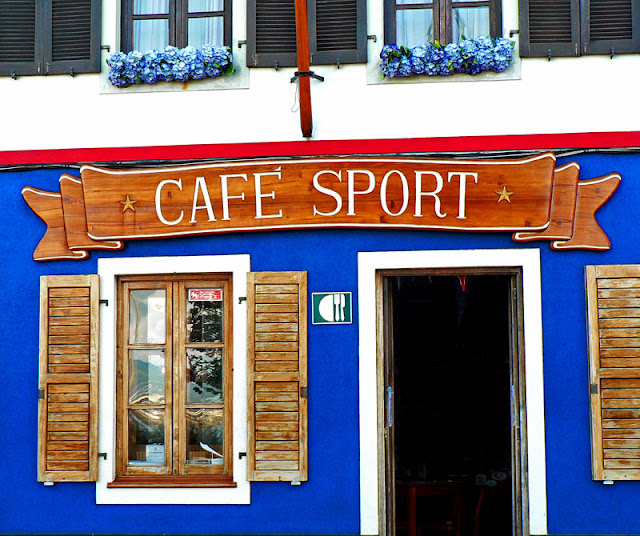 Since we had plenty of time to spare while waiting for the winds to pick up, we decided to leave our mark in Horta. Pekka volunteered to do the job which required a steady hand and artistic skills. 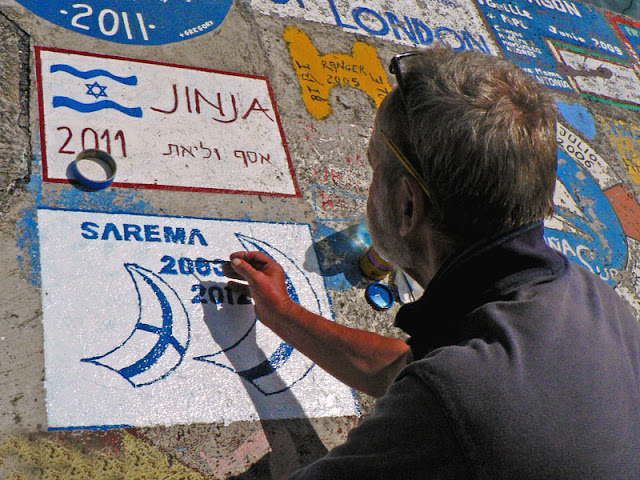 While Pekka was acting the artist, Latte and I went for a walk and, amongst the hundreds and hundreds of works of art that cover every available inch of the concrete quays and walls of the marina, we spotted several made by our sailing friends and acquaintances from different parts of the world. 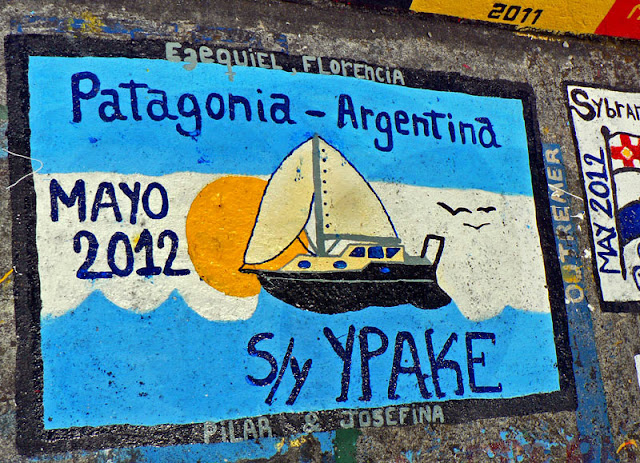 As the weather forecast continued to promise nothing but flat seas and sunshine for the foreseeable future, we didn't have the patience to wait any longer. On the 17th of July, we said 'Adios' to Horta and embarked on our final leg of the season, this time equipped with enough fuel to take us all the way to Lagos, Portugal, if need be. Till the 22nd, the ocean surface was as smooth as silk, but it had its benefits too. Thanks to the calm seas and sunshine, dolphin watching and photographing was utterly enjoyable! 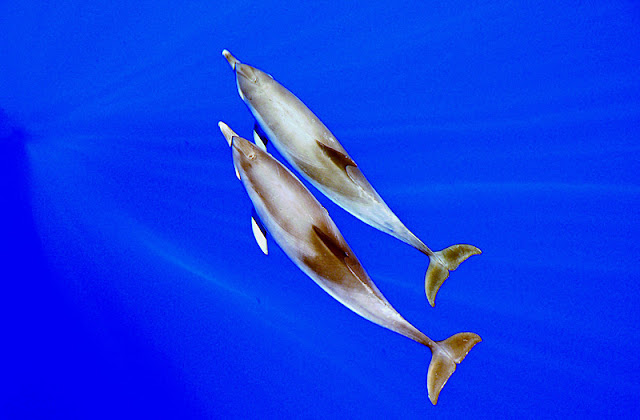 On the 23rd, as we neared the periphery of the high pressure area, we finally found the winds that had been avoiding us so far. To celebrate the occasion, we put Amalia Rodriquez on, and as we enjoyed the good music, the good winds and, as usual, the good food, we could see, in our mind's eye, the majestic cliffs of Cabo de Sao Vicente rise from behind the horizon. Henceforth, it was going to be plain sailing all the way to Portugal - or so we thought. 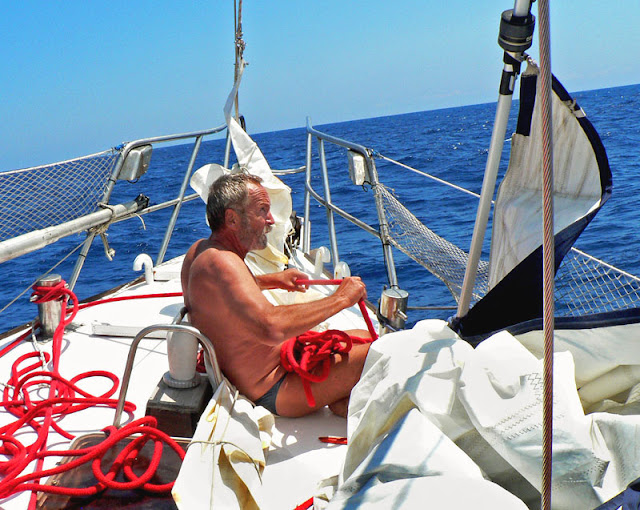 On the 24th, around noon, we heard a LOUD BANG!!!, and after a few seconds' confusion as to where the sound came from, we saw that once again the culprit was the forestay. This time it was the chain plate that had broken. The forestay with the Furlex was swinging loose, and all the 75 square metres of sail were flapping uncontrollably in the wind. During a single season, in addition to the numerous technical and other problems we have encountered, we have managed to rip our cruising chute, break the inner forestay, and now this! Although there was absolutely nothing we could have done to prevent any of these incidents, it doesn't make us feel any better. Now, as we only have about 200 nautical miles to Portugal, we most sincerely hope that this was the last mishap of this incredibly unlucky season! 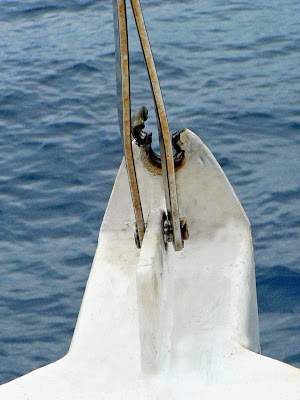 Contrary to what we had hoped for, our run of bad luck continued! On the 25th,  while happily motor-sailing towards Portugal in moderate winds, when changing shift at 4 am we noticed that our speed was dropping, and was soon less than three knots. This time the source of the problem was the transmission, the same transmission that was repaired in Buenos Aires just three months ago. According to Pekka, we could now use the engine in reverse gear only, whereas going forward was impossible. As this information was a bit too much for me to cope with under the circumstances, I went straight to bed and told Pekka not to wake me until we were in Lagos! Pekka, persistent as he is, continued trying to solve the combined problem of no forestay and no transmission. When I woke up a few hours later, Pekka told that the transmission couldn't be fixed at sea but that he had managed to reinstall the forestay, and we were back in business. We are now making reasonably good progress, but what will happen when we reach the south coast of Portugal where the winds are expected to abate, and how we are going to get into the marina remains to be seen. So, stay tuned!