Ilha Grande, a remnant of the Brazilian Atlantic rainforest is the home of several threatened species, including the brown howler monkey, maned sloth, broad-snouted caiman, and red-browed Amazon parrots. Although, during our short visit, we didn't manage to see any of these endangered animals, it was still good to know that they were there, and that they have a chance to survive on this beautiful, protected island. 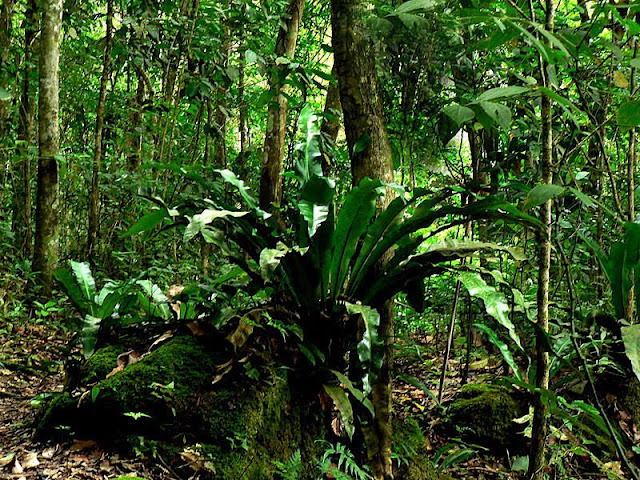 At sunset, we listened to the silence surrounding us and, after dark, to the enchanting sounds of the jungle, the shrieks, the shrills, and the squeaks of, maybe, frogs or insects or... we couldn't guess what. They were so different from the monotonous buzzing of big cities where we had stayed far too long, and we enjoyed them so! 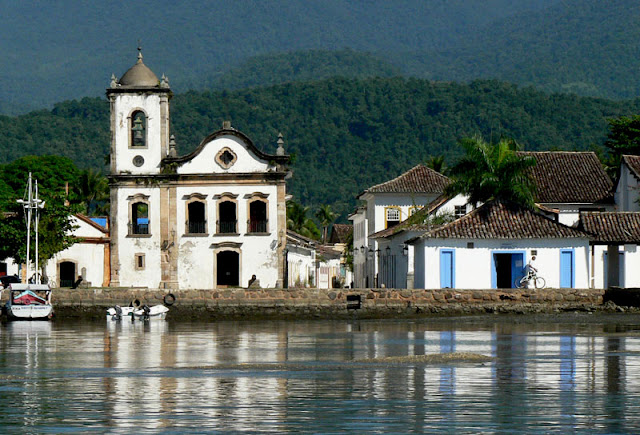 From Ilha Grande, we sailed to Paraty, a UNESCO World Heritage Site and one of the oldest towns in Brazil, mainly for provisioning purposes but also to see the only town in the world we know of that makes use of the tide to clean its streets. 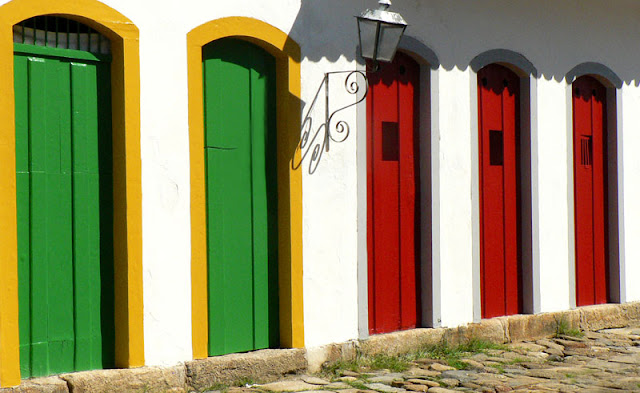 After Paraty, we sailed via Ilha da Cotia to Ilha da Anchieta, where we arrived late in the evening of March 22nd and dropped anchor just before a thunder storm hit the island. The next morning, we went ashore to see the island and its wildlife. More than anything else, we wanted to see the Capybara which is the biggest rodent in the world, the top recorded weight being 91 kg for a wild female from Brazil, and a close relative to chinchillas and guinea pigs. Right on the beach, there was a small family of capybaras, consisting of a huge dominant male, three smaller males, four females, and a group of young ones who gathered into a group as we neared them. In some areas, capybaras are hunted for their meat and pelts, and also killed by farmers who consider their grazing to compete with their livestock. But, not on this protected island, where they are free to roam anywhere they like. 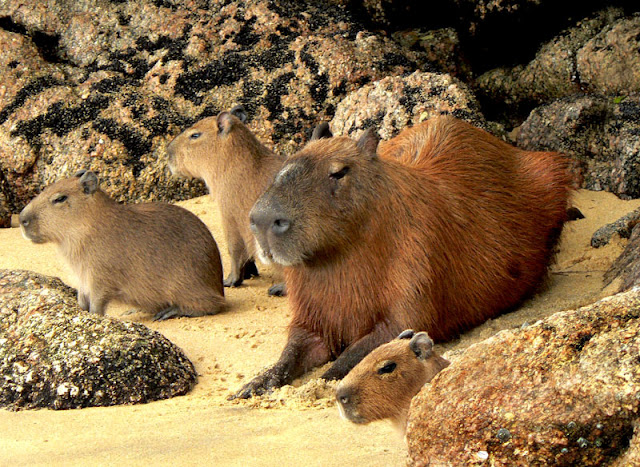 Before going on a hike across the island, we returned to the boat to change our flip-flops to hiking boots after learning that the island's fauna also includes a number of poisonous snakes and spiders. 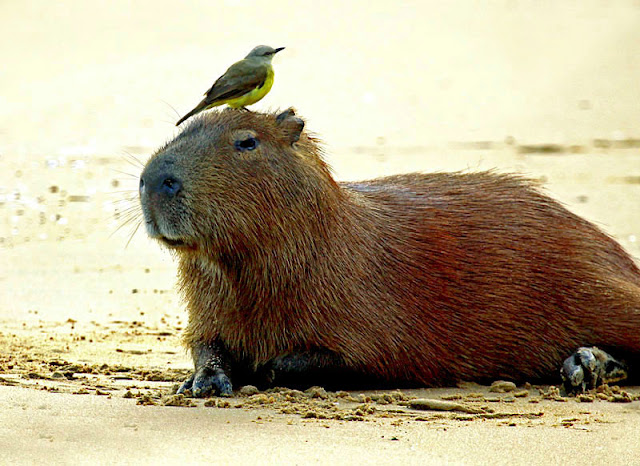 While in the forest, we tried to walk as quietly as possible so as not to disturb the animals but, since we are no Indians, we could hear them retreating before us as we came closer. During the hike, we managed to see one panicky capybara, a surprised marmoset, a lone hummingbird, and a few magnificent butterflies, all much bigger than the hummingbird. On the way back, it started to rain and, within minutes, we were soaked to the skin. At first, we tried to find shelter underneath the foliage of big trees but soon realized that it was of no use. As we continued walking along the winding trail, it dawned on us that, actually, there is no better way to experience a rainforest than to be there when it is raining. 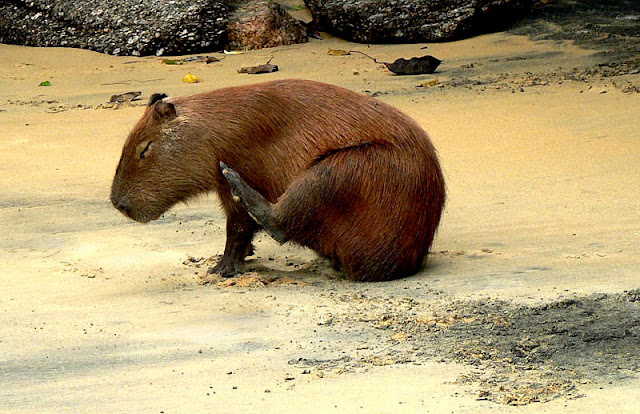 From Rio de Janeiro we sailed to Ilha Grande, approximately 60 nautical miles further south. Since 60 miles normally means about half a day's sailing, we anchored in Enseada do Botafogo near the Sugar Loaf for the day and set sail around 9 pm in order to be in Enseada do Abraão early next morning. As luck would have it (actually, why wasn't I surprised at all!), we had headwind and counter-current all the way to Ilha Grande so that, after about 20 hours of motoring, we arrived at Abraão the following day around 5 pm.
The next morning, we went ashore to explore the tiny village. We tied our dinghy to a tree near a small building which, to our amazement, advertised 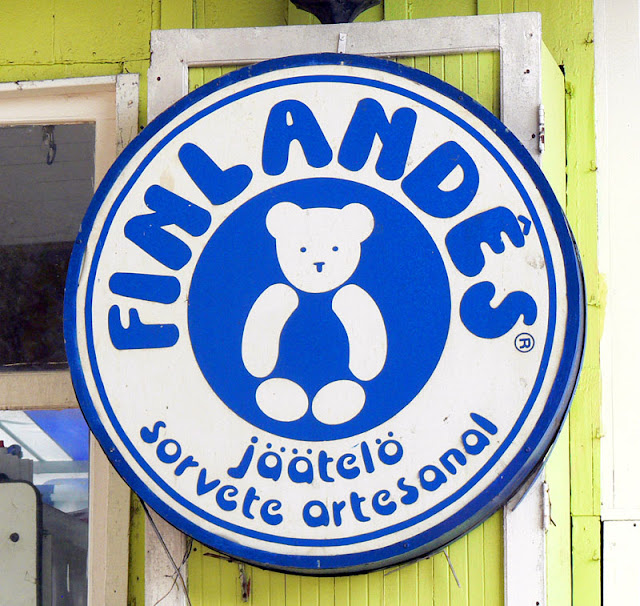 On a Brazilian jungle island, an ice cream parlour selling Finnish ice cream which is, as everybody knows, the best in the world! Who could resist that? Well, at least we couldn't, and Pekka had a scoopful of Finnish Chocolate and I took Creme Finlandês which turned out to be my all-time favourite, rum and raisin with an additional ingredient, cashew nuts, which made it even better. What a wonderful way to start our explorations in the wild!
Lähettänyt RiMaK klo 14.02 Ei kommentteja:

When sailing in Enseada de Jurujuba, we saw something strange floating in the water, something that, looking from afar, we could not quite comprehend at first. As we came closer, it turned out that there were hundreds and hundreds of oil canisters and thousands of water bottles tied up in bundles, all anchored to submerged lines. It looked like an artistic installation but, of course, it served a more practical purpose: it was a Poor Man's Breakwater. What an ingenious way of reusing plastic bottles! 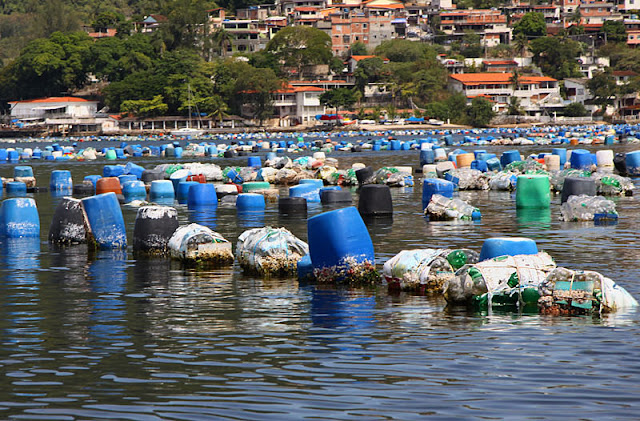 Baia da Guanabara appeared to be excellent fishing grounds. Even in the small basin of Marina da Gloria practically in the heart of the city, big silvery fish were jumping about in abundance, bringing to mind our summers in Alaska. In the bay, there were small boats anchored all around with one or two fishing enthusiasts aboard. As there are no marked shipping lanes, big cargo vessels and cruise liners had to carefully manoeuvre around them. It was nice to see that it is not always the small that must give way to the big! 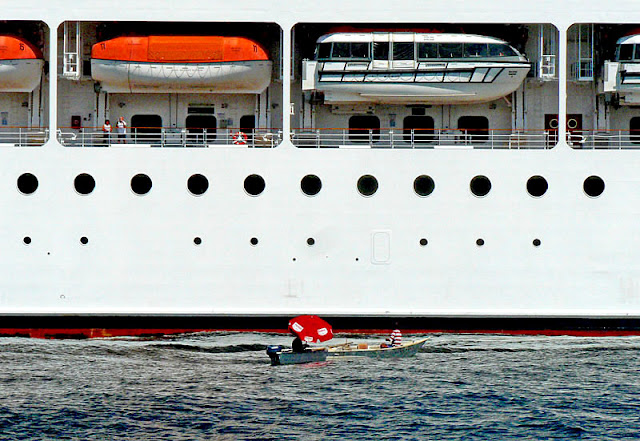 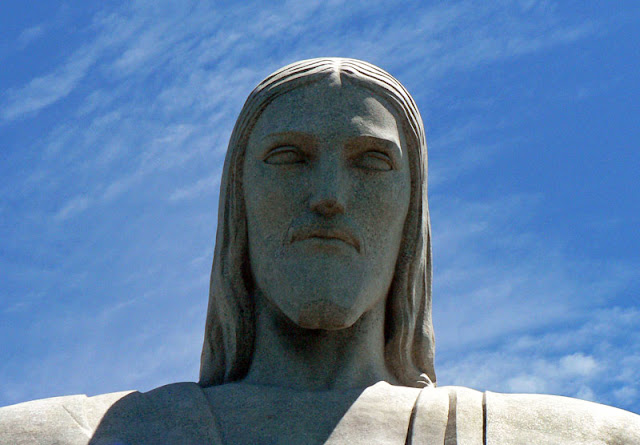 Initially, we had thought of skipping Rio de Janeiro because of our schedule (as tight as ever!) but, fortunately, we changed our mind. Although we spent only a few days in Rio, we learned to know it better than Salvador where we had spent more than a month. During our short visit, we fell in love with this beautiful city, with its lush greenery, steep mountains, and white beaches. All this is thanks to José, a surgeon, a fellow sailor, and a true Carioca. Without him, we would have been just a pair of dumb tourists wasting our precious time trying to figure out which attractions to see and how best to find them. 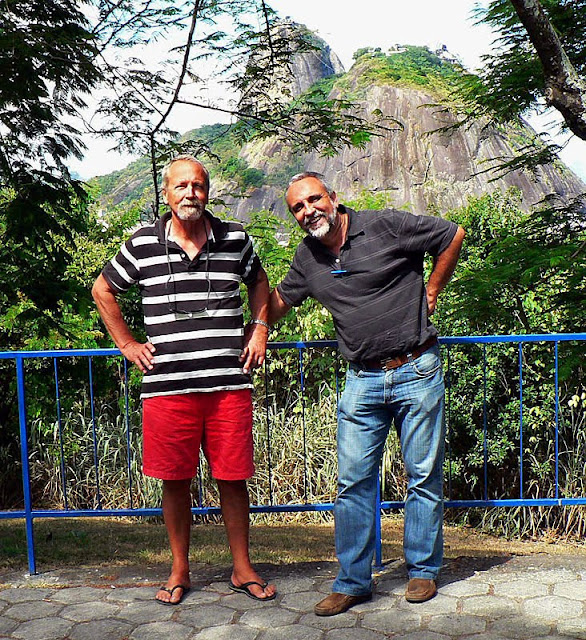 José gave us a one-day Crash Course in Rio de Janeiro. From 10 am till 10 pm he drove us around both by car and by boat, and entertained us with interesting stories about his beloved city, its history, geography, architecture, and people. After the sightseeing tour, we took José's boat to Enseada de Botafogo where we dropped anchor near Pão de Acúcar, aka the Sugar Loaf, and enjoyed delicious seafood cataplana in the company of Flavia and Clarissa, the two most important girls in José's life. Thank you, José Antonio, for a day to remember! 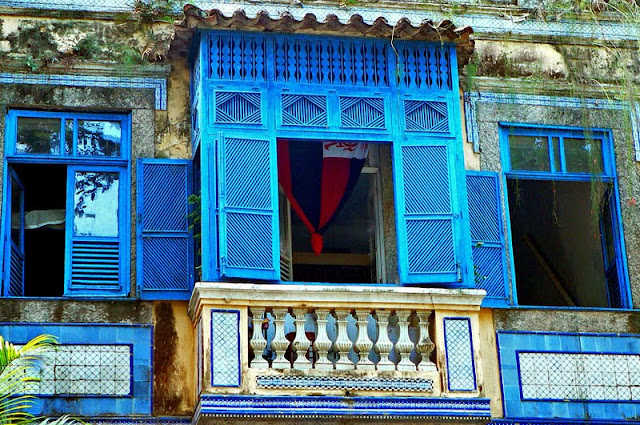 On the Way to Rio de Janeiro


Our week at sea was absolutely exhilarating although the winds could have been more favourable. Surprisingly, we had headwind for the first 36 hours (prevailing winds N/NE!) and no wind at all for four days out of the seven but, to me personally, that didn't matter. The main thing was that we were on the move again! 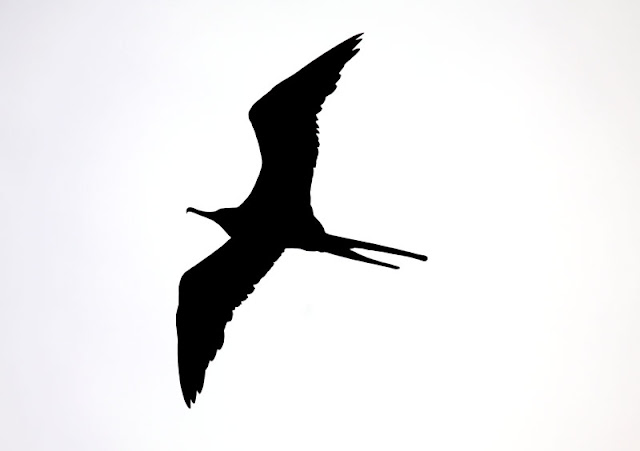 We had the sun, the sea and luckily enough, a full moon which made the nights almost as enjoyable as the days. As usual, we soon fell into a comfortable daily rhythm of reading, writing, sightseeing, fishing, cooking, sleeping, and keeping watch. 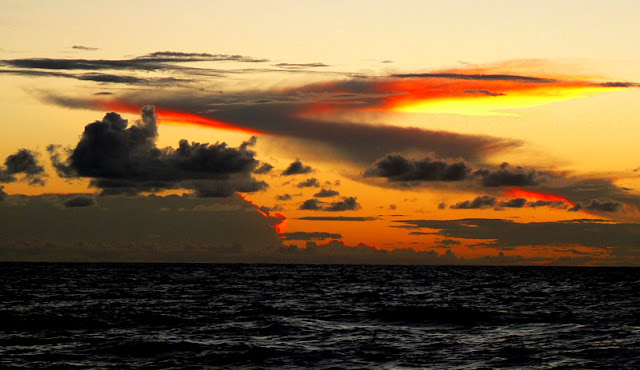 By sightseeing, I mean being up on deck and trying to spot anything there is to be spotted either in the sea or in the air. This is actually very different from being on watch as you don't have to keep a sharp lookout but instead, you can relax, enjoy the scenery, and even let your thoughts wander if you feel like it. In addition to fishing boats, cargo ships and, in our opinion, far too many oil rigs, we saw a number of boobies, one of my favourite species of seabirds, several schools of dolphins, one of Atlantic Spotted Dolphins, and a small, curious whale which we later tried to identify, assisted by our Field Guide. A juvenile Fin, Sei or Bryde's Whale?

One of the highlights of the leg was when, after four days of continuous fishing, we finally managed to catch a fish, unidentified but extremely delicious. We seasoned the fish with salt and black pepper, fried it in butter with lots of garlic, and garnished it with fresh coriander. The downside was that before this, we had lost two of our best lures, but that's life. 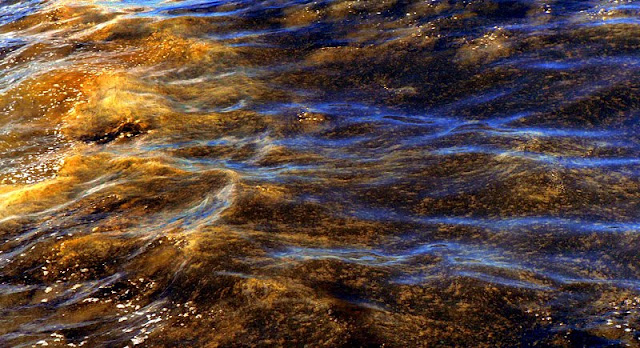 During the week, the one worrying thing was that, for more than two days, we were motoring in waters full of algae, so thick in places that it looked like noodle soup. Years ago, we had experienced something similar in the Baltic Sea which, unfortunately, has been in a very bad state already for decades due to being more like a lake than a sea, without any proper source of fresh sea water. But never before have we seen anything like this during our travels on the Atlantic Ocean!
Lähettänyt RiMaK klo 14.12 Ei kommentteja:

To the Seas Again


We were forced to spend almost a month at Bahia Marina, Salvador, because Pekka had to fly to Finland, and after his return, we had to wait for him to recover from a European flu virus he had brought with him. Now, after about four weeks we are ready and more than willing to continue our journey. 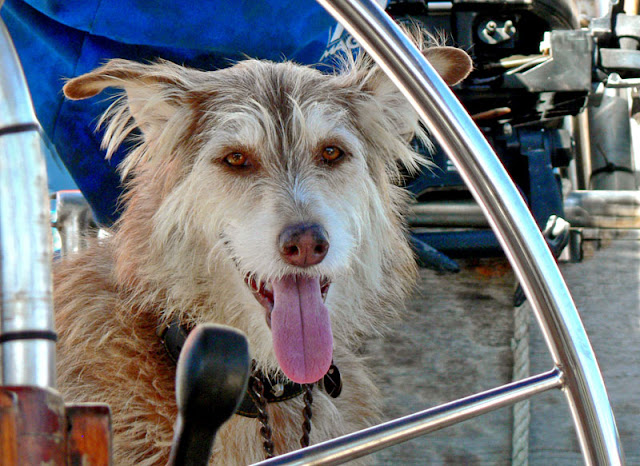 From Salvador, we will sail uninterrupted to Rio de Janeiro where we should be within a week, weather permitting of course.
Lähettänyt RiMaK klo 11.59 Ei kommentteja: