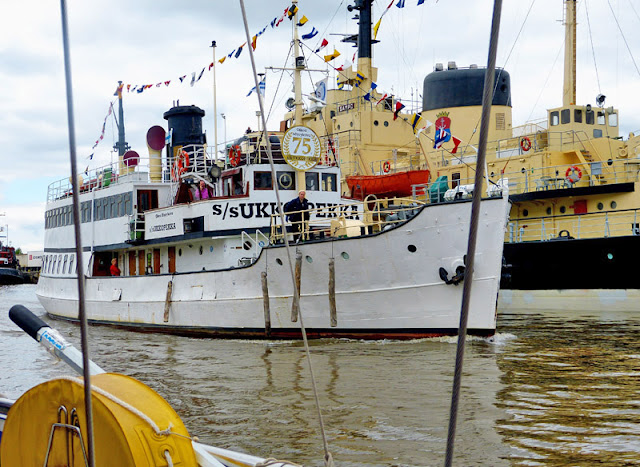 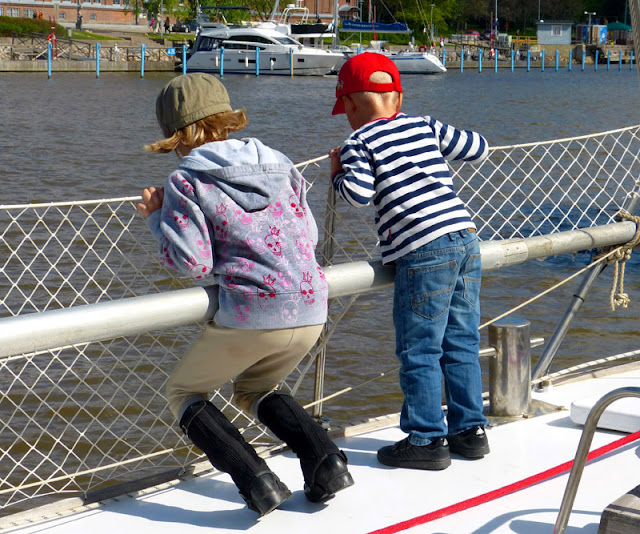 From Holtenau, we motor-sailed on smooth seas and in an all-engulfing fog to Utö, Finland's outermost island. Utö has always had a special place in our hearts, not least because Pekka spent the first five years of his life on this rocky little island. As it was the last place we visited when we left Finland eleven years ago, it was only appropriate that it was our first port of call now that we had returned. 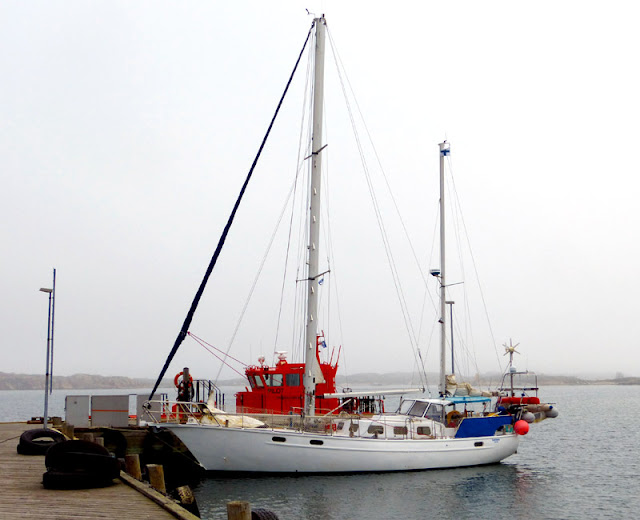 Back in the 90's when we started taking sailing more seriously, Pekka remembered reading an article in the Finnish Boat Magazine on “Real Sailors” who gather in Utö every year on the 6th of December to celebrate Finland's Independence Day. As we too wanted to become real sailors it was only natural that, on the 5th of December, we set off for Utö. During the passage, an icy sleet began to fall and soon our deck was like a skating rink, and all the lines were frozen stiff. We arrived in Utö as the night was falling and the wind picking up and, of course, there were no other boats to be seen! 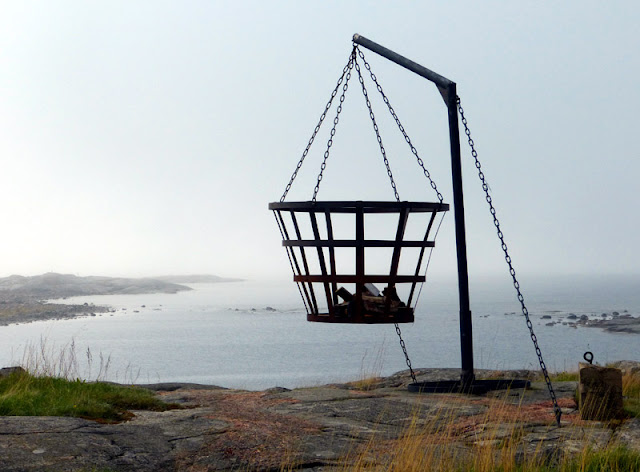 During the night, the wind increased to gale force and was eventually blowing close to 70 knots from the south. We spent the following two days tied up to the L-shaped dock, our good boat Sarema tilting so fiercely that nothing could be kept on the tables. We passed the time watching pilots crawl on all fours along the dock to see how their boats were doing. Oh, those were the days! 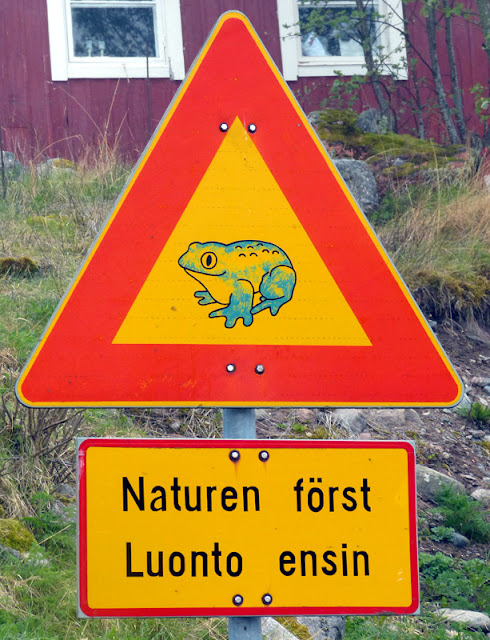 To the Baltic Sea

It turned out that it was only the split pin in the forestay toggle that had broken and as a result, the proper pin had come off (and disappeared, if I have understood it correctly). Luckily, Pekka managed to fix it himself. Pekka has gone up the mast so often frequently that this time, I didn't bother to take any photos. 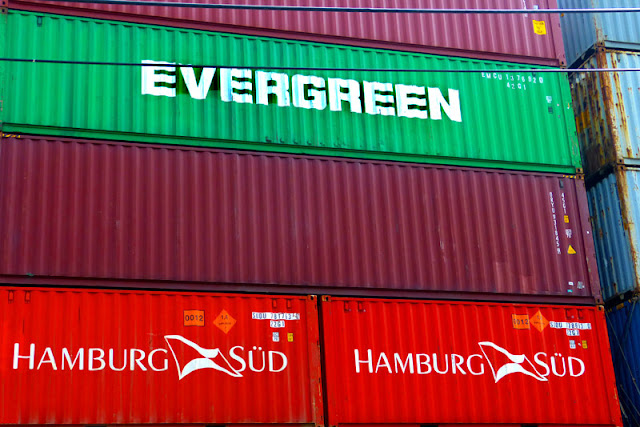 The Brunsbüttel marina is an interesting place because it is located literally right next to the lock, and the big container ships passing by block the view completely. This time, the marina was absolutely packed because of the Helgoland Regatta that started the following day. Sarema was along a floating pontoon with two Swans alongside her. This meant an early morning for us as, before leaving, the crews of both Swans, about ten of them, walked across our deck to and fro between the bathrooms and the boats. But it was just as well as we wanted to get to Holtenau and the Baltic Sea before nightfall. 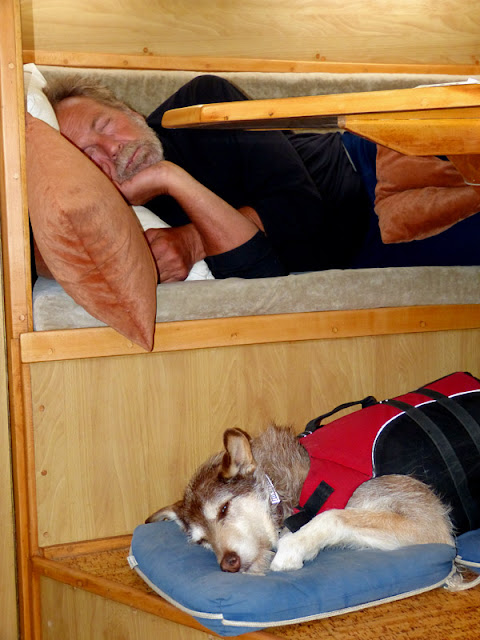 It was a beautiful day with warm sunshine, by far the warmest day since Lagos, and very little wind which was perfect for motoring through the Canal. We enjoyed the lush greenery of the Canal banks and listening to birds singing in the nearby trees. 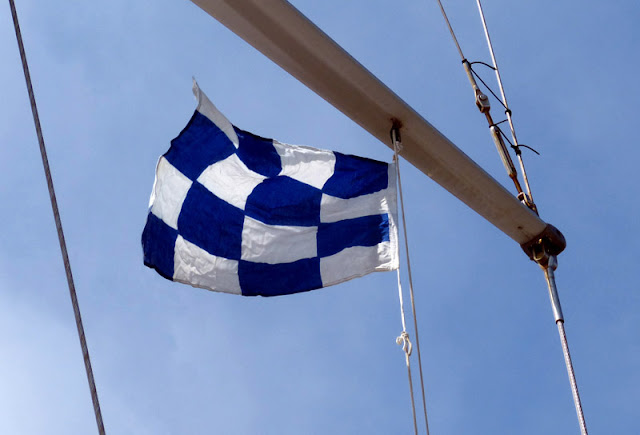 There were an amazing number of waterfowl in the Canal which we tried to identify with the help of our Field Guide to the Birds of Europe: Mallards, Cormorants, Oystercatchers, Great Blue Herons, Mute Swans, Canada Geese, Greylag Geese, Tufted Ducks, Common Mergansers, Red-breasted Mergansers etc. and to our great surprise, birds that bore a remarkable resemblance to Egyptian Geese?! 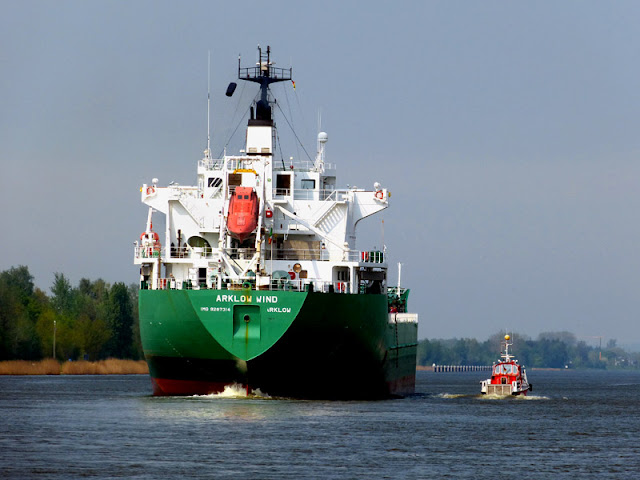 We went through the Holtenau lock around eight in the evening and spent the night in a marina close to the locks. There was clearly another kind of Regatta taking place here with beautiful old sailing ships from around Europe. 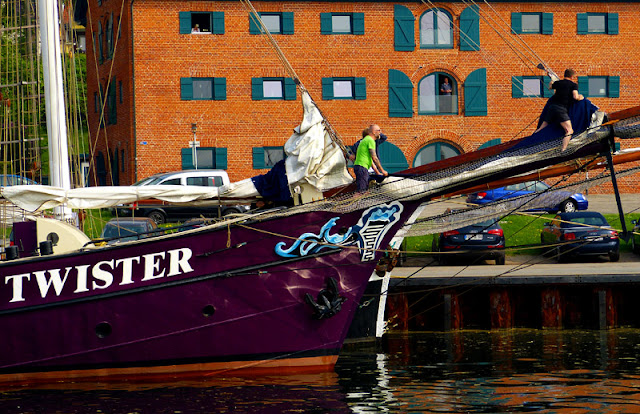 Again, we awoke earlier than we had intended as a member of the marina personnel came to collect the overnight fee around seven in the morning. After unhurried breakfast, we cast off, motored to a fuel station and with our tanks full, headed for the open sea. 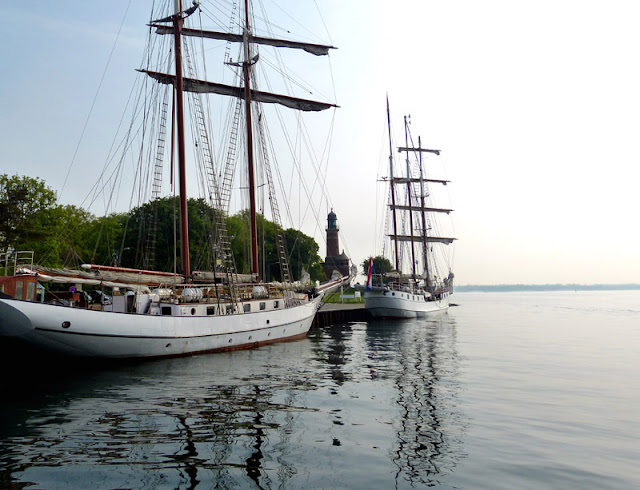 Through the English Channel

I now know a place where I will never ever want to go back again, and that is the English Channel! Oh my God, there were currents running every-which-way, ferries rushing back and forth, and a zillion ships all over the place. It was a miracle that we managed to squeeze us in! 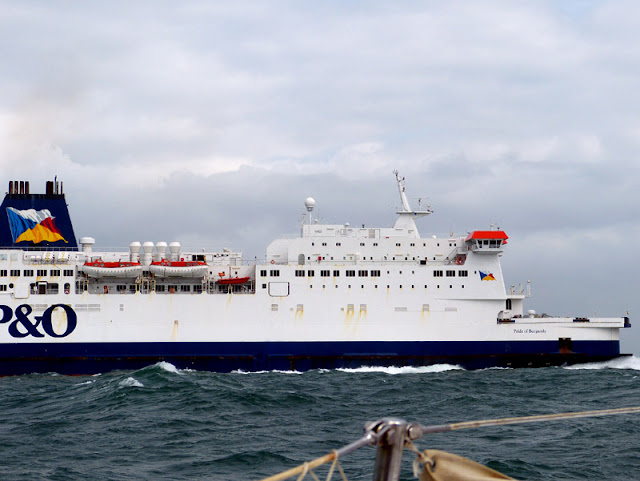 Although after Dover Strait the conditions improved considerably, it was a rugged ride altogether and we arrived in Brunsbüttel, Germany, dead tired as neither of us had hardly slept a wink while sailing through the traffic-infested waters. We were also a little upset as our forestay broke in the Channel. To be quite honest, we could very well have done without this additional delay in our already tight schedule! 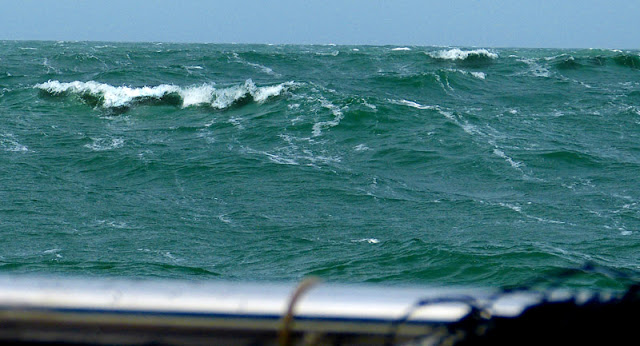 But, as you know a good night's sleep can make a world of difference, and this morning when we woke up and realized that we were soon about to enter the Baltic Sea for the first time in eleven years, we felt absolutely marvellous! 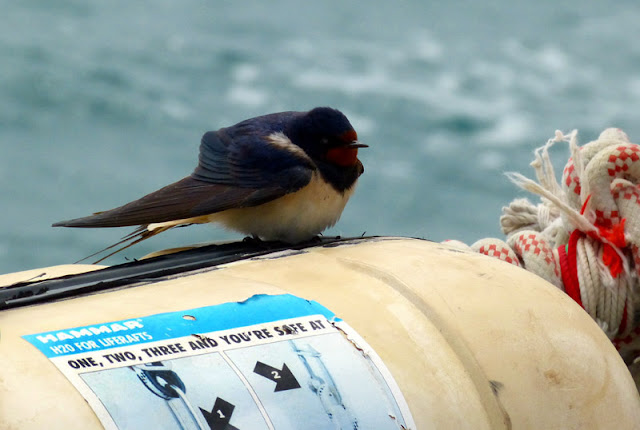 We'll try to fix the forestay problem as quickly as possible and continue, hopefully already tomorrow, our passage through the Kiel Canal towards Finland.

A Farewell Feast in Cherbourg

When wandering round Cherbourg's old town, we came across a lovely little market place with stalls selling fruit, vegetables, bread, meat, sausages, cheeses, fish, shellfish etc, etc. You could also buy food to take away, and as we wanted to taste a little bit of this and a little bit of that, we ended up having a proper feast aboard on our last evening in Port Chantereyne. 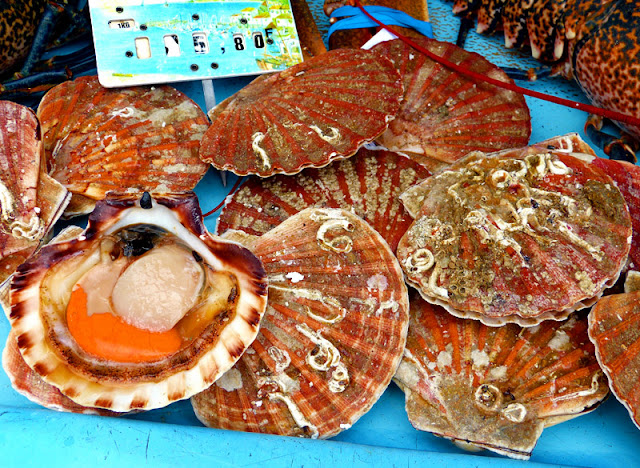 A Break in Cherbourg

On the 8th of May, while happily continuing our voyage, we heard Guernsey Coast Guard give a weather forecast on VHF: “Force 6 from SW for the Channel Islands”. That didn't sound too bad, in fact, we thought it would give us a good boost towards the Kiel Canal. But when, a few hours later, they had changed the forecast to Force 8, with gusts exceeding 45 knots, we thought it better to head for Cherbourg which was only about 30 miles away from our current position. 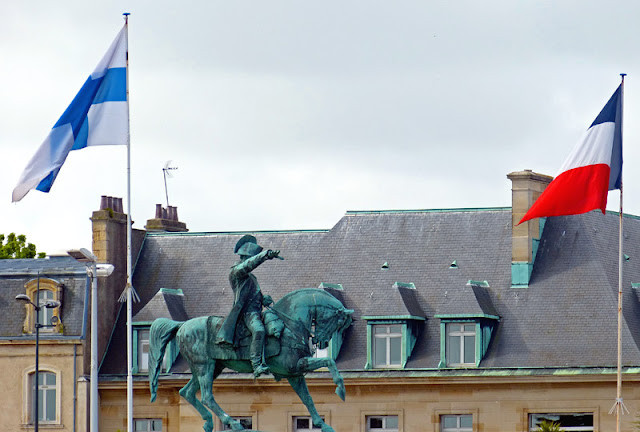 We arrived in Port Chantereyne just before dawn. The wind picked up early in the morning and continued to blow for the following two days. While waiting for the weather to improve, we passed the time sightseeing in Cherbourg's old town which, as in Vigo, is located right next to the marina. 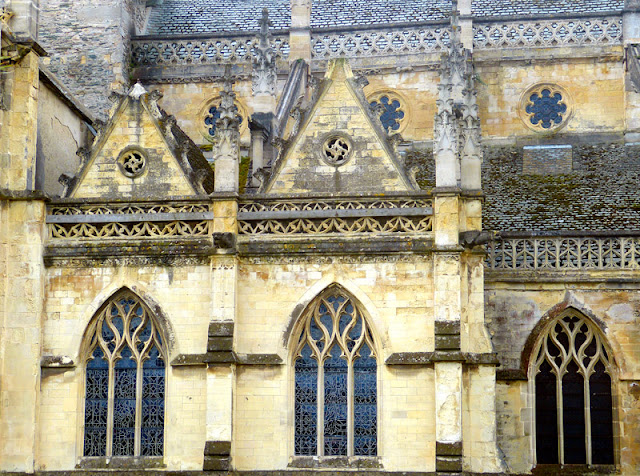 This year, Cherbourg celebrates the 50th anniversary of 'Les Parapluies de Cherbourg', one of my all time favourites. But, unfortunately, we had no time for celebrations as the wind began to abate, and we could continue our interrupted passage to the north. 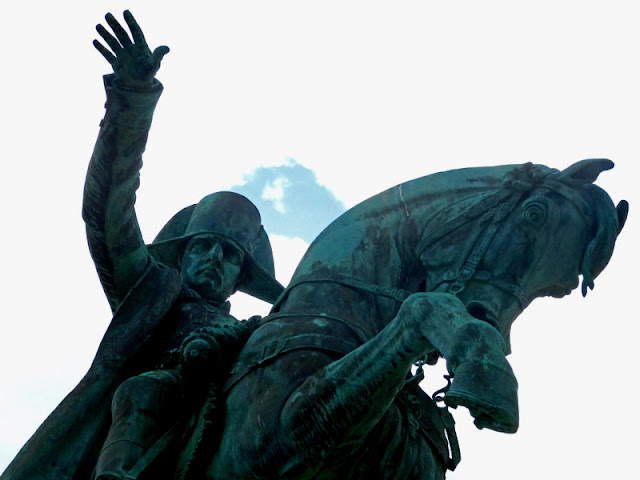 Across the Bay of Biscay


Our first ever crossing of the notorious Bay of Biscay took three days. The conditions varied from sunny and calm for the first one and a half days to cloudy, foggy, and partly rainy for the rest of the crossing. The wind was15 to 25 knots from SE. So, nothing to complain about, except that after leaving Vigo, we noticed that a split pin had become loose in the spreader head, and Pekka had to climb up the mast to fix it! 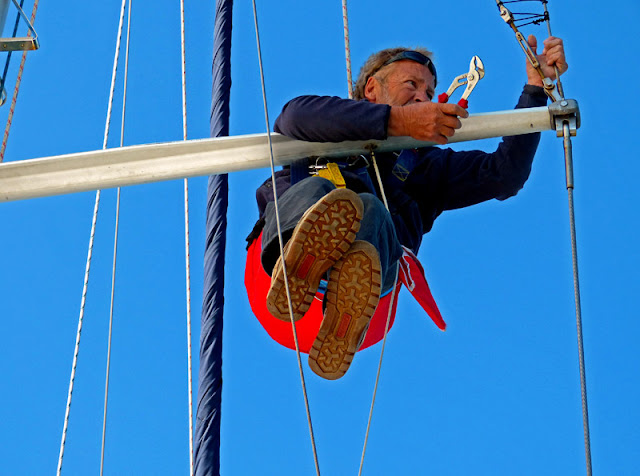 Although we were sailing nonstop to make up for the lost time, we had an amazing number of visitors on board: a Galician house fly, three fruit flies, a tern, and a wet and worn out barn swallow which stopped by on our third day at sea. Our speed of five to six knots at the time was clearly too slow for the bird and, after resting for a while, it continued its migration north on its own. 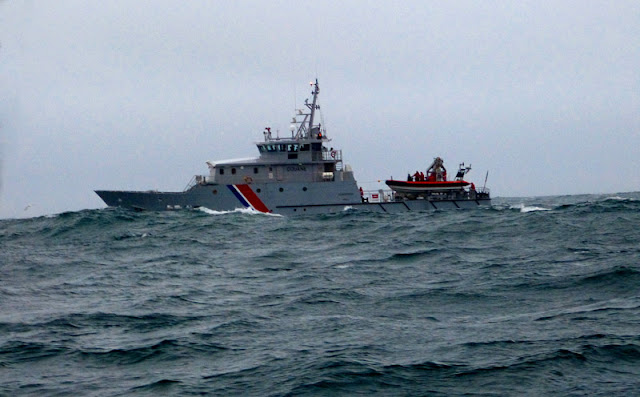 Just as we were about to round the isle of Ushant and enter the English Channel, a French customs patrol vessel hailed us. We could continue our passage but they would send five  customs officials over to inspect our boat. The breaking waves were about two metres and our speed about seven knots when their RIB came alongside the Sarema. As we watched the officials climb on board, Pekka's comment was “If you want to work for Customs and Immigration at sea, you cannot be fat, clumsy or uncoordinated.” I couldn't have agreed with him more!


Since they were mainly looking for drugs but had no dog with them, we offered Latte for the job. For some reason, they kindly turned down our offer. 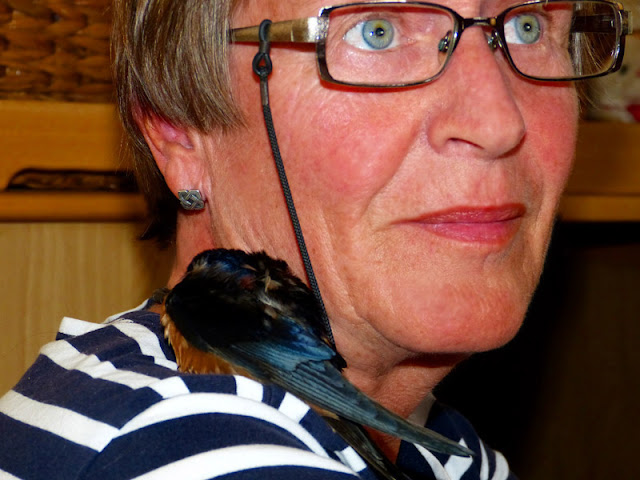 During our first day in the English Channel, a bird flew right into our saloon and made itself at home there. This ragged hirundo rustica savignii had come all the way from Egypt and was badly in need of a rest. We gave it fresh water but that was all we could provide for this tiny insect-eater. The bird stayed aboard for several hours, occasionally flying around but mostly napping either on my camera bag or on me. We were a little worried about the well-being of our exotic visitor but near the island of Guernsey, it spread its wings and flew away. We like to think that it made it!


We have now spent a whole week in Vigo, waiting for the wind to abate. 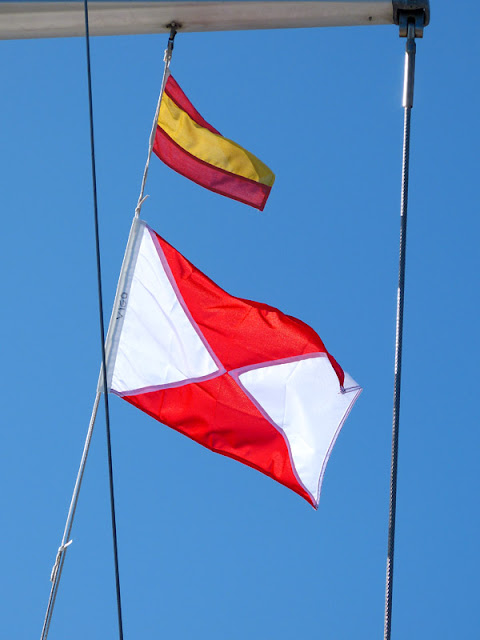 This morning, we were ready and more than anxious to continue our delayed voyage but as luck would have it, the Real Club Nautico had run out of fuel!!! So, we'll stay here yet another day but the positive thing about this is that the wind should be even more favourable for us as of tomorrow. 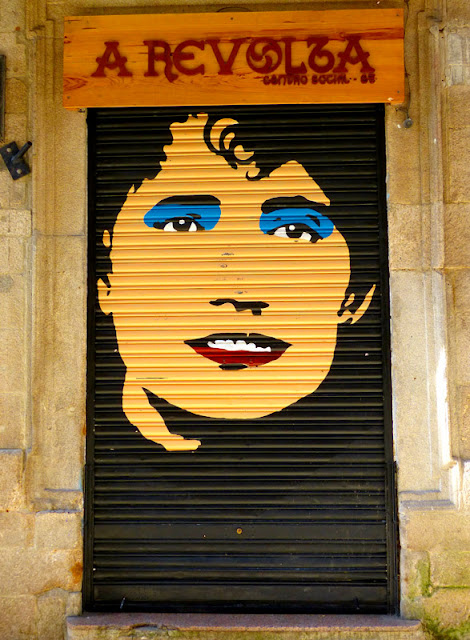 During the past week, we have explored every nook and granny in Vigo's lovely old town, visited numerous (maybe too many!?) interesting bars, taverns, restaurants, and pubs all keeping up the old tapas tradition: with every glass of wine, you are served something salty and delicious included in the price of the wine, typically tortilla, small pies, local cheeses, sausages etc. 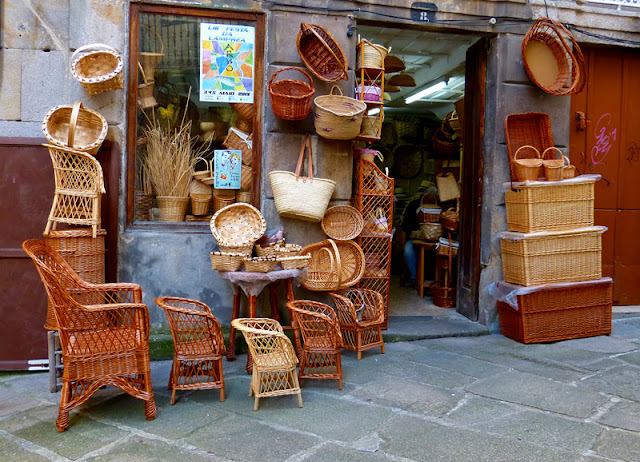 In Vigo's old town centre, Casco Vello, some of the street names date back to the times of guilds and tradesmen. One day, while sauntering along Rua Cesteiros, Basket Weavers' Street, we stopped at a wickerwork shop to buy a basket which we have found to be the best way to store fresh fruit and vegetables on board.

Today, as our last venture in the city of Vigo, we took part in a noisy demonstration against Spanish banks of which, as ex-Spanish residents, we have very little if anything positive to say. 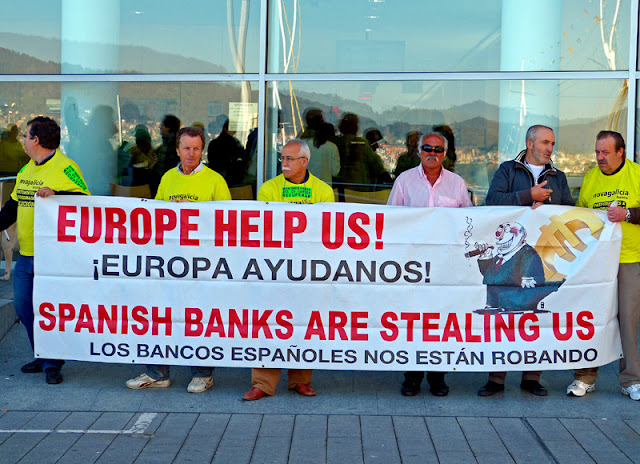 Thanks to our rotten luck with fuel, we could once more enjoy a delicious Galician lunch, our last for a long, long time: pulpo, berberechos, navajas, and pimientos de padron. 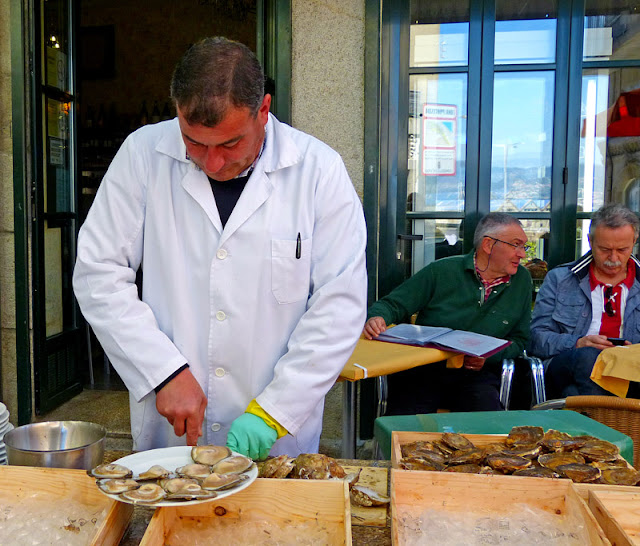 Tomorrow, around 10 a.m. we'll cast off the lines, (hopefully!) fill our tanks, and head for the Bay of Biscay. 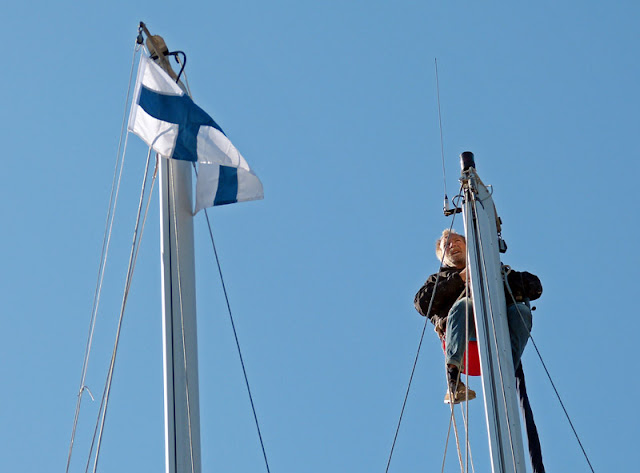